The Kaeo-Kerikeri Union Parish was formed in 1974, bringing together into union the Whangaroa Methodist Circuit and the Kerikeri Presbyterian Parish.

The first Wesleyan missionary to arrive in New Zealand was Samuel Leigh who visited the Anglican Mission in the Bay of Islands in January 1822, helping there while it was decided where to set up the first Wesleyan mission. On 6 June 1823 the ship St Michael sailed up the Whangaroa Harbour. On board were the Methodist Mission party, the Rev Samuel and Mrs Catherine Leigh, the Rev William White and Messrs William Hall and James Shepherd from the (Anglican) Church Missionary Society. Mrs Shepherd and Mrs Beveridge, the Captain’s wife, were also on board. On 8 June Samuel Leigh preached his first sermon at Whangaroa.

With the aid of their Anglican colleagues, the Wesleyans arranged with the chiefs Te Ara and his brothers Te Puhi and Ngahuruhuru for an area of land on which to set up New Zealand’s first Methodist Mission Station. On 10 June a site was chosen on the southern bank of the Kaeo River, across from the kāinga of Ngāti Uru and opposite Pohue Pā. Their decision to settle there was followed by strenuous labour during a period of incessant rain and stormy weather. The Rev Nathaniel and Mrs Ann Turner and Mr John Hobbs joined the Mission at Kaeo on 6 August. The missionaries named the Mission “Wesleydale”.

Four years later tribal warfare swept through the Whangaroa area and in January 1827 the Mission was abandoned and totally destroyed. The Mission was later re-established at Mangungu in the Hokianga.

In 1869 a Wesleyan church was erected on the mission site and around 1885 this was sold, dismantled and moved to Kaeo to be used as a Gum Store. (In 1990 it opened as the Kaeo Chemist.) A second church and a parsonage were built on the hillside north of Kaeo in 1886 (the Kaeo Model Deed dated 1887). The third Methodist Church to be built in Kaeo, Wesleydale Methodist Memorial Church, was erected in 1922 as part of the Centenary Celebrations of the Methodist Mission to New Zealand. The architect was Mr Chappell and the church was built by Mr A Woolley Snr of Kaeo at a cost of 1,500 pounds.

The church was originally above the surrounding area, but the road was later raised. This, together with it being on a flood plain, has made the church more and more prone to flooding. These are flood photos from recent years.

The Memorial Cairn stands upon the site of the first Mission and was erected by Māori members of the Methodist Church under the guidance of the Rev A.J. Seamer.  It is built of water-worn grey marble boulders which were transported by barge from an ocean beach outside the Whangaroa Heads, through the harbour and up the Kaeo River to the site, by descendants of the chiefs of Samuel Leigh’s day.  The cairn was dedicated at the Centenary Celebrations on 8 March 1922 by the Rev Grainger Hargreaves, the representative of the British Conference to the Centenary.  Two adjacent boulders on the cairn bear inscriptions.  The one on the left with the wording below, the one on the right with the same in Maori:

ON THIS SPOT
THE METHODIST MISSION TO THE NATIVES OF NEW ZEALAND
was established
June 10th 1823
by the Reverend Samuel Leigh
What God has wrought!   Numbers XXXIII 23
This Cairn was erected by the Maori Members of the Church 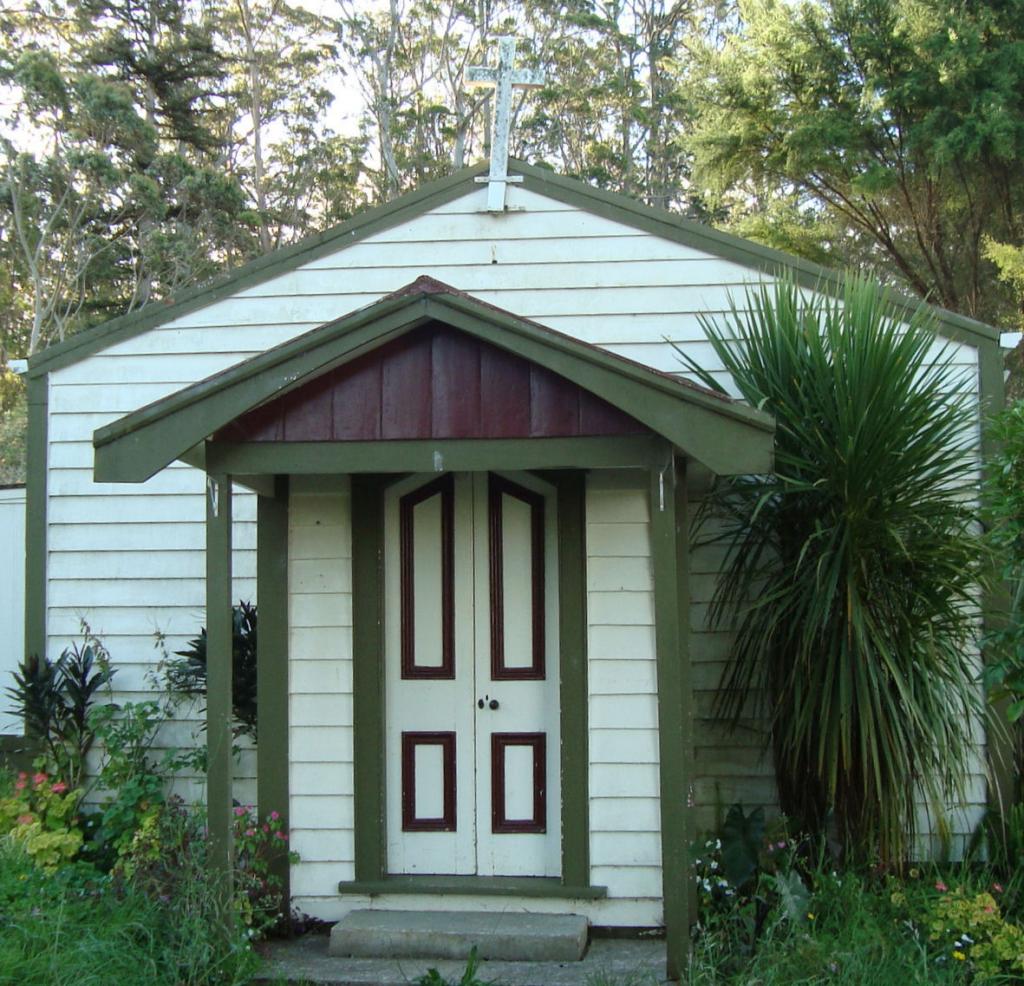 The Whangaroa Circuit provided for a wide area and newsletters show that in the 1940s there were services in Kaeo, Kerikeri, Totara North, Omaunu, Matangirau, Te Patunga, Pungaere, Waipapa, and Waiare. The Kerikeri Methodist Church was officially opened on 4 October 1940, after the former Whangaroa Court House had been moved for the purpose onto a prominent place on Kerikeri Road, with the land and funds donated by the Jolly and Little families. This later became the chosen site for the new Kerikeri Union Church.

Presbyterian worship was a late arrival and was being held in Kerikeri by the early 1950s, under the umbrella of the parish centred at Kaikohe. The inaugural meeting of the interim Session for the newly-formed Kerikeri Presbyterian Parish was held on the beach at Paihia on 21 November 1954 at 2pm. Church services were provided in Kerikeri, Paihia, Moerewa, and Kawakawa. A home baptism in the Whangaroa district led to a group forming the first Presbyterian congregation in that district with monthly services in the foyer of the Public Hall. Later, Kaeo services were held in the Anglican church.

In Kerikeri land was purchased on the corner of Kerikeri and Butler Roads – a canny choice in hindsight given the price it fetched as commercially re-zoned property when it was sold in 2009. A manse was built and was dedicated on 10 April 1957. The next building project was a hall which was dedicated on 23 February 1963, and was used for Sunday services into the early years of Union.

From 1971, when union negotiations began, Sunday services in Kerikeri alternated between the Methodist Church and the Presbyterian Hall. A new Union church was built on the Presbyterian site and the church was opened and dedicated on 17 February 1979. An adjacent section and house were added to the complex through the generosity and foresight of a member of the congregation. 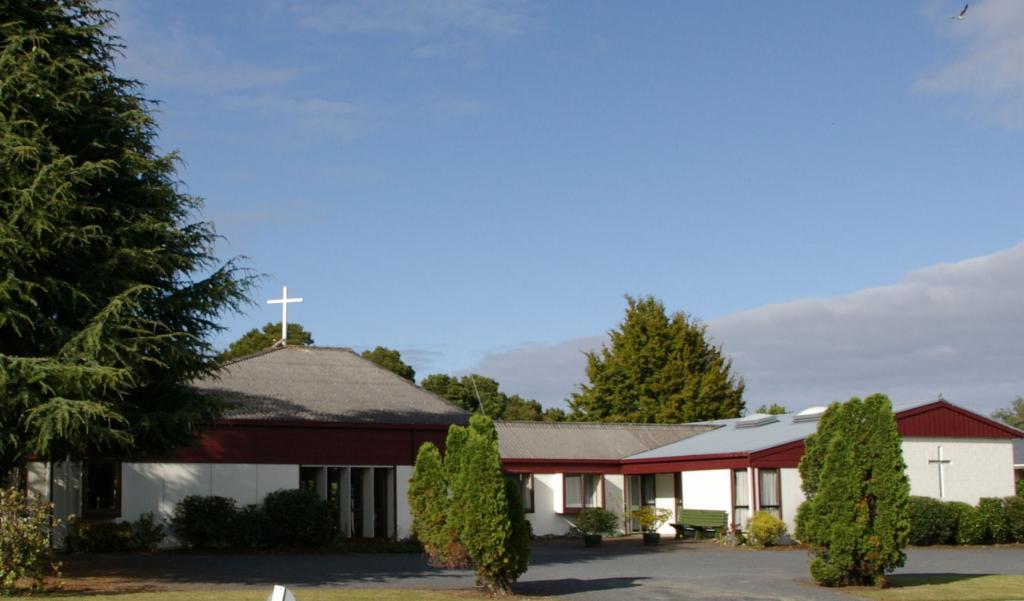 In Kaeo the Wesleydale Memorial Church became the home for the Kaeo Union church services. A new attached church hall was built in 1986, using money from the sale of the Methodist parsonage in Omaunu Road, as well as materials, donations and voluntary help from the community. This hall was built above flood level – with a last minute uplift when a significant flood revealed an error in the proposed levels. Two major floods in 2007 changed the recognised maximum flood level. During repairs to the flood damaged hall it was therefore raised even further and its particle board floor replaced with timber. A blessing of the refurbishments took place on 1 November 2009.

The local Union had been formed in expectation of the Methodist and Presbyterian churches uniting at a national level (as happened with the Uniting Church in Australia). When this did not happen the parish remained committed to local Union, working as a united presence within Kaeo and Kerikeri.

The decision to sell the Kerikeri church and church house site in 2008, and build a new church on the Methodist site at 144-146 Kerikeri Road, is part of an overall strategic plan to maximise the value of parish resources for mission and ministry within the local communities and beyond. Part of the vision is in the very nature of the new building: it is Home for the Kerikeri Union Church and Open Home for the Kerikeri Community.